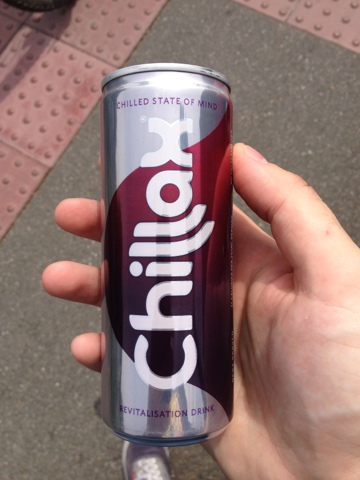 Though it is a widely reviled word, "chillax" is certainly a nicely formed portmanteau. It crams twice the relaxation sentiment into the space of one word, and now we have all that crammed into a small can, in liquid form.

Yes, Chillax is another one of these "relaxation" drinks most likely aimed at dangerously caffeine riddled burnouts or recovering alcoholics. Really it's just a blend of fruit juices, and that's certainly what it tastes like, albeit watered down. There's really nothing special here. It tastes alright, certainly like apple juice, but there's a but of a funny aftertaste. I certainly didn't feel more chillaxed than usual after this, but I guess I'm just quite a chillaxed soul.