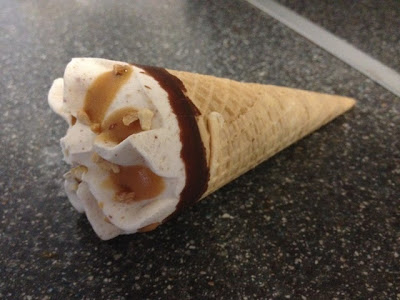 It's warm, so the ice creams are out in full force at the supermarkets. While browsing for cheap alternatives I came across the Tesco "cones", which are basically their version of Cornetto. They had the usual fare on offer, the strawberry, the chocolate, and the mint, but also a peanut butter flavour, surprisingly. Since I love the peanut butter Ben & Jerry's I had to grab some of these to see if they measure up.

These peanut butter cones contain peanut butter ice cream, topped with toffee sauce and peanut pieces, wrapped in a cone. The cone is pretty much the same as a Cornetto, so you know what you're getting there. The choice of toffee sauce on top is a little odd, but it certainly didn't work against the overall flavour. The ice cream itself, I have no faults with at all. It is distinctly peanut buttery, and very smooth and creamy. I was expecting, since it's an own brand ice cream, that the initial flavour would wear off the further into the cone I got, but once I'd made my way through the toppings, there was a nice surprise in the form of a core deep inside the cone itself.

These cones are great. They taste delicious, and the flavour is consistent throughout. If you're a fan of peanut butter products, you certainly can't go wrong with this, especially as you get four for £1.