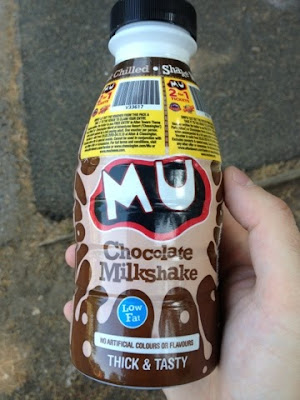 Mu are a relatively new company, I've only ever seen their range of cheeses on the shelf. I haven't tried those, but I assume they taste sufficiently cheesy. But now Mu have branched out, into milkshakes of all things. Well, it's dairy, so I guess it makes sense, though I don't see any Dairylea or Philadelphia milkshakes.

Anyway, this milkshake announces itself as "thick and tasty", and also "low fat". I can't truly assess the latter, because I don't have scientific food testing equipment, but I can certainly confirm the former. This shake is pretty thick, more so than your Frijjs or Yazoos. It's also very creamy, a quite delightful texture. Perhaps the best thing is the flavour. There is a problem with some most shakes in that the featured flavour is a little too intense, and makes the whole experience a bit sickly. This Mu milkshake, however, has a very mellow, yet clearly chocolatey taste, and it really blends in with the creaminess to create a very nice shake. Give it a go.