Summer is in full swing now, and that means ice creams, ice creams everywhere. But the problem with ice cream is that it sure does melt quickly in the blazing sun. If only there was a way to enjoy your favourite ice cream bars with none of the mess. Wait, there is! The new Wall's ice cream inspired chocolate range is on hand to deliver all that frozen goodness in non-frozen form.

Well, yes, granted, if you want an ice cream, the cold temperature is probably one of the main factors you want to experience. But for those who have sensitive teeth, or... are allergic to ice(?), these may well be a good choice for you. 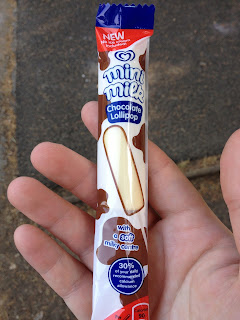 I first tried to Mini Milk chocolate lollipop. This comes in chocolate flavour too, but I went for vanilla, since there is enough chocolate in the others to be getting on with. The first thing you'll notice is that it's certainly quite small, because I have normal sized hands. Still, it's a nice size for a little snack, although the price doesn't really reflect that. It's basically a vanilla/white chocolate style chocolate lollipop, with some nice creamy stuff inside that is trying to mimic the texture of ice cream. It sort of pulls it off, but it's not like the real thing. Still nice though. 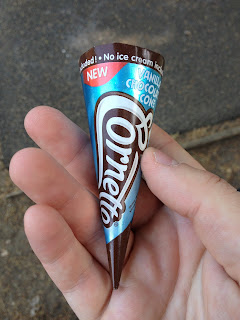 Next up was the Cornetto. Again, very tiny, but I was quite impressed with how faithful this one is to the original. The cone is the same, and the nuts sprinkled on top are identical. It's still filled with the same creamy stuff found in the Mini Milk, but it blends in really nicely with the genuine Cornetto ingredients to deliver a very nice chocolate. It's just a shame it's so small. 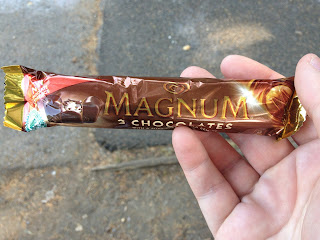 I saved the best 'til last though, or so I thought. I love Magnums. The ice cream inside is fantastic, and the way the chunky chocolate casing breaks apart makes me feel happy inside. These Magnum chocolates certainly give you the most bang for your buck in this range, since you get three reasonably sized chocolates. They're basically Magnum shaped, but without the stick, and filled with the creamy stuff that is present in the other two. Even the fragility of the chocolate is retained, although this one just seems to break into two distinct parts. But the chocolate itself is dark, for some reason. The milk chocolate on Magnum ice creams is sublime, and to have the smaller version assault my senses with a bitter flavour left me with a sour taste, both literally and figuratively.

So all in all, these little chocolates aren't bad. They're certainly very small compared to their price tag, and they're not perfect, but they're a nice idea pulled off with a fair bit of success. You can't beat the ice creams though.