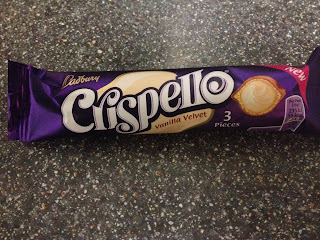 It's high time for another version of Crispello, the lady-oriented, naughty but nice, figure friendly Cadbury bar. The original was a double chocolate affair, sporting wafer with a chocolate centre, wrapped in more chocolate. Now the filling has been replaced with creamy vanilla stuff, that Cadbury have decided to liken to velvet. Nothing appeals to the ladies like velvet (at least that's what I assume the Cadbury marketing department is thinking). 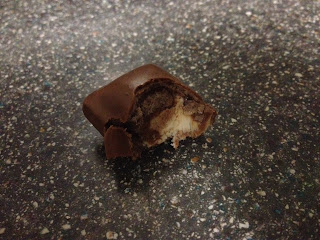 So there are the innards. This Crispello has that same basic anatomy of the double chocolate. Three separate pieces, so Cadbury can pretend that it's supposed to be spread out into three sittings, although it never will be. But each piece is a perfectly formed chocolatey casing, filled with some very smooth, and not too sickly, creamy vanilla stuff. It's certainly all very nice to eat, but like the original Crispello, it's not really for me. There's a lot of airy fairy wafer, that I would rather have filled up with chocolate. But for those who like the double chocolate Crispello, this is a very nice variation.