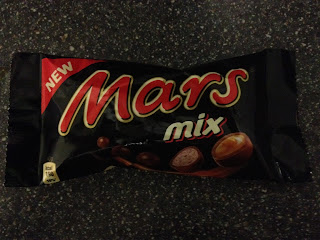 Whatever happened to Mars Planets? You know, those little balls of Mars chocolate goodness, with either a crispy, chewy or soft malty centre? Well, I haven't seen any for a while, and apparently we were meant to have forgotten all about them, because now Mars are shoving their new "Mars Mix" in our faces and assuming we'll be excited.

The reality is that these are essentially just two thirds of the original Mars Planets. The crispy, Malteser like pieces have gone, so we are just left with either malt or caramel, just like in a Mars bar. I thought new iteration of chocolate were meant to add variety, not take it away. But instead we are left with what seems like a Mars bar cut in half and rolled into chocolate covered pieces. Not that they don't taste nice, but if you squish the whole pack together, you'd just be left with a misshapen Mars bar, and that's a bit boring. Essentially, they're a load of balls.