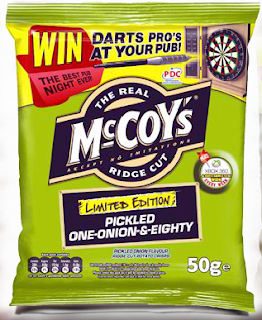 I'm quite a fan of McCoy's crisps. Well, the salt and vinegar ones at least. The flavour is really intense for a regular shaped crisp, maybe those ridges kind of work after all. But now there are a couple of limited edition flavours out, and my attention was drawn to the pickled onion.

I, like many others, count Monster Munch as the definitive pickled onion crisp. They taste awesome, and once in a blue moon you may find the random build up of flavour at the bottom of the packet that will knock your tastebuds out. So yeah, they're a tough act to follow, and these McCoy's certainly don't taste like Monster Munch. I was trying to put my finger on what they tasted like exactly, until I realised that they taste like actual pickled onions. So yeah, they're pretty nice if you like the real thing as opposed to Monster Munch.

The flavour did vary throughout the packet. The crisps at the top didn't have too much flavour, but the ones nearer the end had a real kick. It was a weird inconsistency, but I guess the salt and vinegar have that problem too. Probably not enough ridges. But these are certainly worth a try.