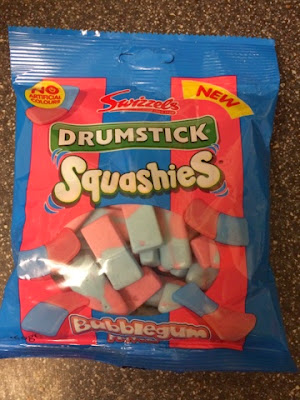 It's been two years now since I tried - and loved - the original Drumstick Squashies. I've since tried the other varieties and also found them to my liking, but the other day I came upon this new flavour, which is a bubblegum twist on my first Squashies experience. Not sure why they tagged the Drumstick name on there, to my knowledge there's never been a bubblegum flavoured Drumstick.But oh well.

The first thing I noticed upon opening the pack is that it certainly smells like bubblegum in there. The aroma is strong and authentic, and coupled with the softness of the sweet themselves, it was almost as if I was getting ready to pop some Hubba Bubba in my mouth. That did lead to some confusion when it came to swallowing, but the chewing went alright at first. The flavour is extremely bold, and distinctly bubblegum (which I found out recently is a mixture of vanilla, berry and citrus). It's perhaps a little too overwhelming though, and what's worse is that it soon gives way to quite a bitter aftertaste. The combination of the bubblegum flavour and the squidgy texture is pretty pleasing to the palate, but I certainly didn't enjoy these as much as the other Squashies flavours. An average addition to an otherwise pretty good line.