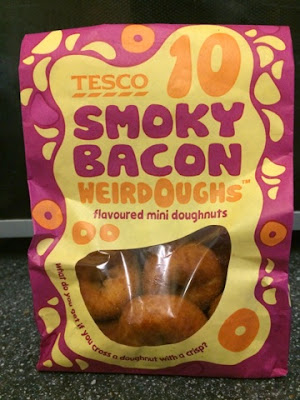 A few months back Tesco introduced Weirdoughs, crisp flavoured doughnuts that sound positively disgusting, but are actually pretty awesome. I can't say I've added them to my list of staple foods, but I definitely had to pick up a bag when I spotted the new smoky bacon flavour on the shelf today. Bacon crisp flavoured doughnuts, sounds like an almighty American mess of a concoction. But I was surprised before, so I had high hopes for these.

Even at first glance you can see there's a fair amount of seasoning on these doughnuts, giving them a lovely dark brown speckled effect. The dough itself is quite soft, but with a slightly harder exterior, meaning they're certainly not too fluffy, but they never become too heavy. The slightly thick consistency actually works very well with the flavouring, which is definitely a tasty, smoky bacon affair. It tastes a lot like Frazzles, and since Tesco are going for the bacon crisp experience, I'd say they've hit the nail on the head. But Frazzles mixed with doughnut? Well, it works, like the cheese and onion ones worked before, and I dare say that I enjoyed these even more. Once I ate one it was hard to stop me eating the entire pack. If you're after something a little different from the bakery, you owe it to yourself to pick up these bad boys.