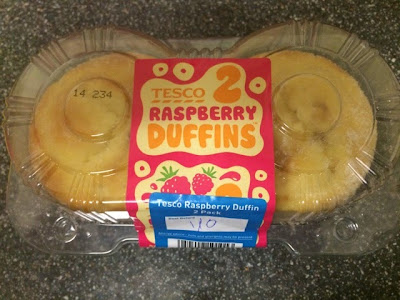 Ah, the Duffin, my first foray into strange bakery combinations when I had one at Starbucks a while back. Now it seems Tesco are trying to get in on the action with their own raspberry Duffins. They're easier on the wallet, at just £2 for a pack of two, but do they coffee giant's not-perfect-but-still-pretty-good offering?

Each one of these Duffins is a sizeable, very doughy affair. If it were a regular muffin, the size would be quite daunting, and probably way too heavy, but thanks to the doughnut like texture it's actually quite manageable. The result is a sugary, fluffy dough that still has a nice bit of weight to it. It does get a bit dry after a few mouthfuls, but thankfully there's some raspberry jam in the middle to break it up. The jam may be a bit thinly spread, and also a bit too thick for my liking, but all in all this is a solid package. Tesco have set out to make a raspberry filled doughnut spliced with a muffin, and that's what you get when you buy these. They won't be hitting the top of my bakery wish list, but I'd definitely buy them again.