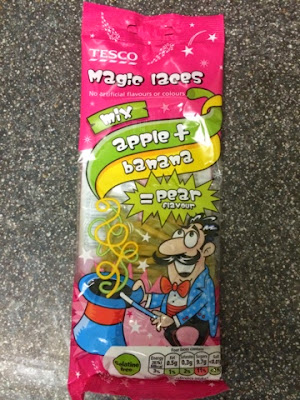 After not being overly impressed by the lime and cinnamon Magic Laces I reviewed last week, I was pleased to find another variety that sounded a lot tastier. The laces have the same premise. Some are apple, some are banana, but mix them together, and they taste like pear! Or do they?

Well, these certainly have a better effect than the last lot. Perhaps it's just because they're sticking solely with fruits. The banana laces certainly taste banana-like, and the apple have a nice crisp apple flavour. But as for both at once? Well, they don't taste distinctly like pear, but I can certainly place the flavour. I definitely enjoyed mixing these up, as well as chewing on them individually, and this is a much better execution of the Magic Laces idea. These are some nice, fruity laces with a twist, and better than the cinnamon and lime effort.