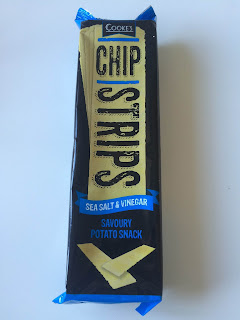 It's always worth browsing the crisp aisle in case there's an interesting new flavour, or occasionally an entirely new product. I came across the interestingly shaped Chip Strips the other day, available in quite a few flavours, from sea salt to BBQ to wasabi. I went for a standard salt and vinegar, as that seems to be the base flavour with which I judge all new crisp products. But what are Chip Strips, why the long packet? Well, you can pretty much figure it out from the name and picture up there, but here's another just to let it sink in. 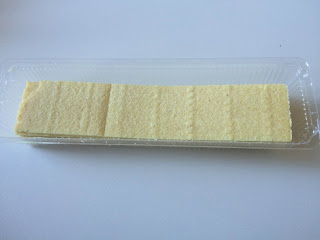 They're like crisps, right, but they're really long. Long crisps? Don't get me wrong, I'm all for different shaped crisps, the now classic Pringle shape makes it perfect for placing around the top of your tongue, tortilla chips have their signature triangle, and Squares are a uniformly shaped classic. But those products can all fit right there in your mouth, while this is... just really long. It feels weird taking one out of the packet and eating it like a 2D breadstick, but hey, I guess the snack industry won't revolutionise itself. Maybe this is the next big thing for parties, everyone walking around eating massive rectangular crisps. Thinking about it, this shape is pretty good for dipping, but once you've had the first bite you're wandering into the socially dangerous and unhygienic practice of double dipping. But with these you could go triple dipping, maybe even quadruple dipping! In the wrong hands these chips could turn your salsa into a veritable hive of bacteria.

But enough about the shape, how do they taste? The chips themselves are quite thin, but they're also a little soft, which works out while eating as they don't break into pieces while you're picking them up or biting, and there is a bit of a satisfying crunch when you take a bite. As for the taste, there's definitely a nice salt and vinegar flavour in these, quite clean with neither element overpowering the other, but it's not particularly strong, and on the odd occasion it's lost in the flavour of the chip itself. Perhaps I was just unlucky and picked up one of the more muted flavours, I'm sure I wouldn't have that problem with wasabi or BBQ, but these were pretty average. I'll probably pick up another flavour to form a better judgement, but this one doesn't pack much flavour, and I'm still on the fence about the shape.