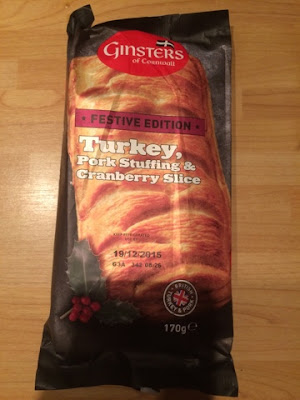 If there's one thing I want in a festive flavour, it's a Ginsters slice. Well, actually it wouldn't be my first choice, but this special edition slice has turkey, pork stuffing and cranberry sauce, so it certainly caught my eye.

This isn't quite as expertly formed as a classic steak slice, but it's not bad. Thr pastry is nice, providing a nice crunch and good flavour. The turkey and pork stuffing are pretty mixed in together, providing a sort of meat patty that has a nice soft, slightly sticky texture that matches the consistency of stuffing. It's not the best quality, but it's filling and sufficiently meaty. The cranberry is nice, but it's pretty few and far between, stuck in in small clumps that add a bit of fruitiness to the slice. It is an interesting addition, but it could have been done a lot better.

This isn't bad. It's not as tasty as the classic flavours, but it's a nicely festive variety. The filling may not be the best quality but it all works out to a pretty alright slice.