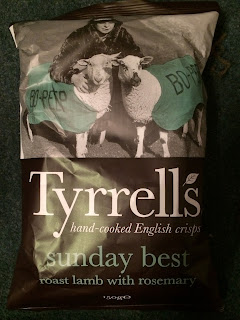 Another day, another pack of Tyrrell's. It's not often I find two flavours I haven't tried at the same time, maybe I've been slacking, but I snagged these lamb and rosemary crisps alongside the lobster cocktail I reviewed yesterday. These seem a much more palatable flavour for a crisp, and despite the fact that I'm not really a fan of meaty flavour, these sounded pretty nice to me.

These do taste like lamb, I'll give them that. It's a nice, full meaty flavour that certainly brings about visions of a nice lamb roast. If it were on its own it may be a little weak though, but thankfully the rosemary is there to add a lovely hint og herb and another level of flavour. The rosemary is a little strong though, and since the lamb is a little weak it ends up being the dominant flavour, but the meatiness holds its own and there's a definite overall lamb flavour that makes this a pretty good bag of crisps. Certainly not the best flavour Tyrrell's has put out, but some good lamb flavoured crisps that are well worth trying out.