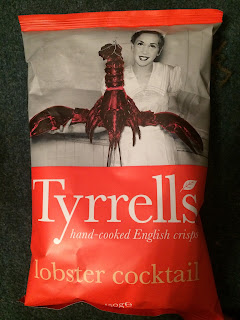 Tyrrell's have brought out a definitive festive flavour this year, but they don't sound particularly interesting, just red and white salted crisps. But, perusing the crisp aisle instead of the festive one, I stumbled upon this variety that I haven't tried before, and I'm not sure how new it is. This is Lobster Cocktail, which is some amount of degrees away from prawn cocktail, which is certainly Christmas related, so I'll run with that.

I didn't quite understand the "cocktail" part of "lobster cocktail" until I read the ingredients, and saw that the rest of the cocktail consists of other seafoods, like prawn and oyster. There's also some paprika and garlic added in, but I think the main focus was on the sea life, as these crisps taste distinctly fishy. Now, I've never eaten actual lobster, but I imagine it would taste slightly more refined than these crisps do given its reputation. Don't get me wrong, these taste more authentically fishy than any other fishy crisp I've tried, but the flavour does seem to be more prawn than anything else. I guess I can't blame Tyrrell's too much, I assume it's difficult to encapsulate lobster into potato form, and they haven't done a bad job, I just hoped that they'd have more of a unique taste. Still, there's not many dedicated sea life based crisps out there, so if that's your craving these will suit you well. They're not bad, but I'm not sure I'll dive in again. Ha, get it?