I thought Kettle Chips were already pretty fancy, but apparently they can go even more posh. So here we have the Chef's Signature range, where Kettle Chips have partnered with some top notch food brands to deliver some right proper flavours. 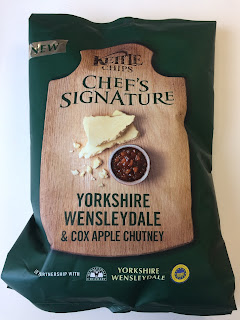 Cheese crisps. I normally find cheese crisps so inherently boring, but I thought this one was worth a go. After all, it's not plain old cheddar, it's proper Yorkshire Wensleydale, and there's some chutney thrown in there to boot. So the end result certainly isn't your average cheesy crisp, it's a far more flavoursome one, and the Wensleydale actually works really well in crisp form. The chutney also provides a bit of fruitiness, but there was something a bit off about these. There's a bit of spice thrown in that I found far too strong, not in a hot way, but in an overpowering flavour way. I know ginger is part of a classic apple chutney, and it's not a bad thing to throw into the mix, but the balance seemed a bit off here, and it threatened to take over the nice cheesy and fruity flavours that I was already enjoying. 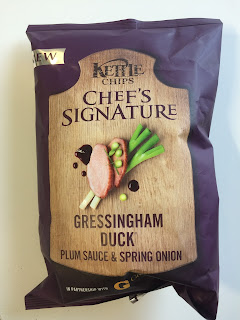 We've got meaty crisps too, Gressingham duck crisps to be precise. I might not have been sold on these if there wasn't some plum sauce thrown in there, but just look at that packet, these look delicious. Unfortunately the plum sauce isn't quite pronounced as I'd hoped. There's certainly a nice fruity undercurrent though, and it works well with the meaty flavour that's at the forefront. It didn't automatically scream "duck" at me, so I guess there's just not enough flavouring overall to satisfy me. There's a little hint of spring onion in there as well, not all that noticeable, but at least it didn't overpower all the other elements. I wouldn't say this is a bad bag of Kettle Chips, but it did fall a bit flat on my taste buds.

These Chef's Signature bags aren't bad, but they don't quite live up to the fanciness promised by the packaging. I think I'll stick with the original range from now on, especially if they keep churning out some nice seasonal flavours. These ones certainly are different though, so they may satisfy you if you're looking for a specific kind of crisp.