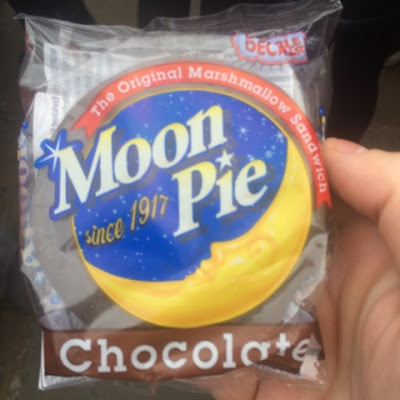 Moon Pie, what a time to be alive. That small Simpsons snippet was all I had to go on regarding Moon Pies, and I've seen them around in the UK a few times, but they've never appealed to me all that much. They just looked like the standard chocolate marshmallow sandwiches you can get from elsewhere. But one I found out that there was supposed to be Graham cracker inside I just had to try it out. It's like a s'more without the effort of making a s'more! 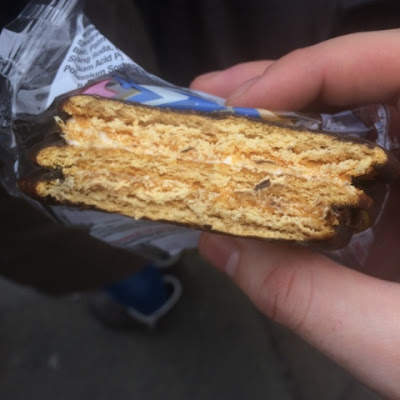 Well, sort of. It's certainly not as warm and gooey as a handmade s'more, and it really doesn't like up to my experiences with making them. The chocolate outside is a nice coating, smooth, slightly creamy, not too fake tasting like some American chocolate. The marshmallow inside has a nice gooey consistency as well, but the problem lies with the crackers. They're not particularly cracker like, they're quite soft and chewy, and there's a lot of cracker compared to the other elements. Sure, I got the flavour of all three as I made my way through this thing, but the cracker part wins out in the end, becoming quite dry and not very fun to chew. It looks like I picked up a double decker Moon Pie as opposed to an original, so that may explain the imbalance of ingredients, but I'm not sure I'd spring for the original in the future. It's a dry, chewy, slightly disappointing sandwich, only made better by the presence of some nicely made chocolate and marshmallow. If only there was more of those bits.