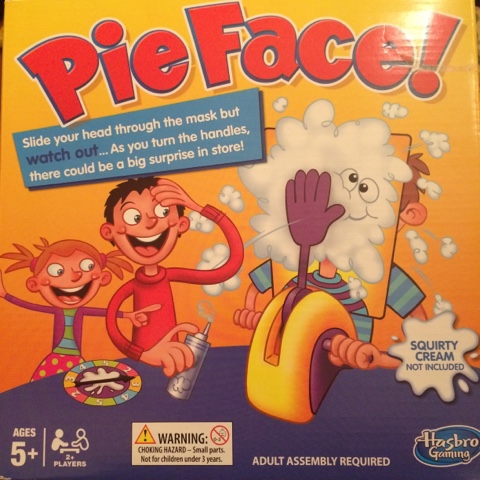 It just ain't Christmas without a good party game, and this year the highlight of the household was Pie Face, popularised by a video that did the rounds on Facebook which then became the official ad for the game.
The premise is simple, there's a base with a crank, attached to a hand that you load up with squirty cream (or maybe shaving foam if you're feeling sadistic). Then you take it in turns to place your head on the chin rest, spin for a number, and twist the crank that number of times. If the hand doesn't launch cream into your face you win some points, if it does then, obviously, you get cream in your face.
It's a simple game, but it is certainly good for a chuckle. Despite having a set of rules, our game just devolved into laughing at each other for getting a face full of cream, and that's really what it's all about. It's certainly not in depth, but that's great, as kids of any age can join in. In a world of Monopoly and various other intense, long lasting board games, this is a great little party game that will get everyone laughing. Just make sure you put a towel down first.
My rating: 5/5
Posted by A Review A Day at 15:02