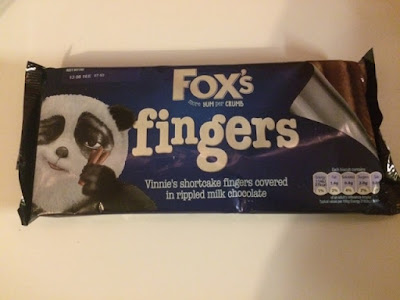 Not content with cornering the market on biscuits, Vinnie has decided to bring out his own brand of chocolate fingers that are eerily similar to Cadbury's version. Well, if there's one thing Vinnie probably knows about, it's encroaching on other people's territory. But while Fox's have a smooth talking panda Don, who do Cadbury have? They haven't even chosen a new Milk Tray man yet. So while this turf war may be over in terms of mascot, we can still decide the winner in terms of taste.

These fingers seem pretty flat in comparison to the classic Cadbury ones, but they do appear to have a thicker coating of chocolate. It's certainly not a smooth outer layer, it seems to have been drizzled on generously, and that's certainly reflected in the taste. These fingers are chocolatey and pretty damn delicious. The inside is a nice crumbly shortcake that still possesses a satisfying crunch. It is a little on the gritty sugary side, and it is perhaps a little too sweet when there's already so much sweetness in the chocolate, but it certainly doesn't affect the flavour all that much. There certainly aren't as many fingers as you'd get in a Cadbury box, but these ones are more decadent, a thicker chocolate coating and a sweeter biscuit, so you definitely don't need that many to fill you up. This is a pretty good offering from Fox's, I wouldn't expect anything less based on their other biscuits. They still don't quite beat a Cadbury Finger though.