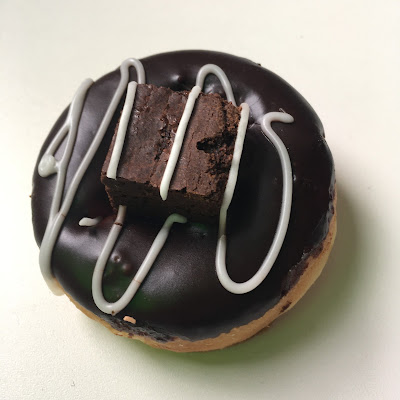 It's time for a new round of Dunkin' Donuts, with a trio of cake inspired creations. There's tiramisu, pecan pie, and this raspberry choc brownie. I had to go for this one, mainly due to the nice brownie chunk on top. Not only that, but there's some raspberry jam buried in there too, What could go wrong?

This is a pretty good combination of flavours. The donut itself is as good as ever, nice and soft, with a generous chocolate glazing to top it off. It may not look like it as the brownie chunk is covering the hole, but this is a ring donut. Not that that's a bad thing, the brownie more than makes up for the lack of extra dough, it's a sizeable moist chunk that blends in really nicely with the rest of the elements. The raspberry jam is a subtle addition, it's not layered on thick, but it provides a fruity hint that rounds this off very nicely. This is one delicious donut, who knew two desserts could go together so well? Well, it was probably self-explanatory, but still, go and grab one of these.