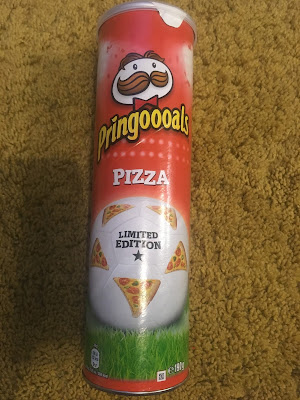 I saw a pizza variety of Pringles alongside the dill pickle flavour I picked up a while back from an import shelf at Sainsbury's. I was going to return and pick some up, but I'm glad I held out on that purchase, as they've now hit the shelves at Asda for a much more manageable £1.50. Pizza flavoured Pringles, sounds like a dream come true. I'm not sure whose dream it was, but I'm sure it was someone's.

It's never quite stated which kind of pizza these are meant to emulate, but I'm gonna guess it's not ham & pineapple (pineapple goes on pizza). From what I could ascertain from the flavourings, they were going for more of a margherita experience, which isn't a bad thing to emulate in crisp form. There are hints of tomato and cheese, so I'd say the basics are there, but they're not particularly strong or great flavours, just a decent enough attempt at replicating the original. There could be some more to these, it looks like the pizzas on the tin have pepperoni on, and I guess there could have been some meatiness chucked in there, but I couldn't pinpoint it, and there seem to be some flavourings thrown on top of these with no real purpose. The cheese and tomato shine through enough, but everything else is lost. This is a pretty good idea from those Pringles guys, and it's pulled off well enough, but these are nothing particularly special, just a nice change from the norm.