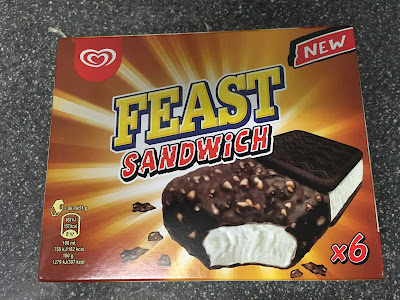 It's not secret that I love a Maxibon, it was a good day when they were re-introduced to the supermarkets. Now it seems there's a contender, in the form of this Wall's version. It's basically the same setup as the Maxibon, but with the classic Feast as the base. So we have half nobbly choc ice, and half ice cream sandwich, covered either side with some soft chocolate cookie.

You know, these are pretty great. I was expecting something of a pale imitation, but they do a pretty good job. We all know Feasts are great, some good chocolate with satisfying crispiness, wrapped around smooth vanilla ice cream. As for the cookie side, it's a little powdery, but it has a good dark chocolate flavour, and enough thickness to make it work pretty well with the ice cream. The only thing I would say is that these are quite small, I guess to keep in line with calorie counts per portion, so it's not completely satisfying. A pretty tasty ice cream though, a good addition to that summer ice cream lineup.