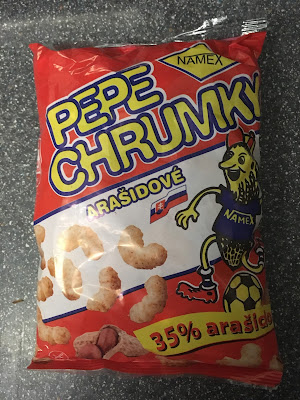 I was recently sent a box of goodies from Halusky, a food retailer who specialise in Czech and Slovak products. I'm always up for some interesting foreign snacks, so I was happy to see what they offered. I'll go through a few in coming days, but this is the one that stuck out the most. It's a bag of Pepe Chrumky. Don't ask me what that means, but they're basically peanut crisps. You may have gathered that from the creepy football-playing peanut mascot. He has a strange expression, those detail lines look like an inordinate amount of body hair... but hey, we can't judge a bag of crisps by the strange cartoon character on the front, as I always say.

In the same way that those chocolate corn puffs I tried a while back pleasantly surprised me, these ones did as well. These are corn puffs too, but with a very nice peanut flavour. They're soft, and slightly oily, which gives a greasiness that's not particularly great, but it does lend to an overall taste of peanut butter, so all in all it's not bad. Great texture, good flavour, I wouldn't mind picking up another bag of these. Looks like they're only 60p in the Halusky store in London too, so that's quite a steal. Worth looking out for.