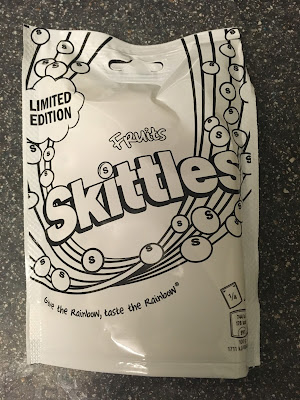 I spied this particularly colourless bag nestled next to the other Skittles at Tesco earlier. It made me do a double take, as any monochrome version of packaging probably would. My first thought, for some reason, was that it was some kind of colour your own packet, not that the logistics of that would work. But it turns out there's an awesome sentiment behind this bag. This is, indeed, a pack of white Skittles. As the blurb on the back reads: "Only one rainbow matters this pride". Skittles have forgone their natural colours in support of Pride this year. That's a statement and a half. 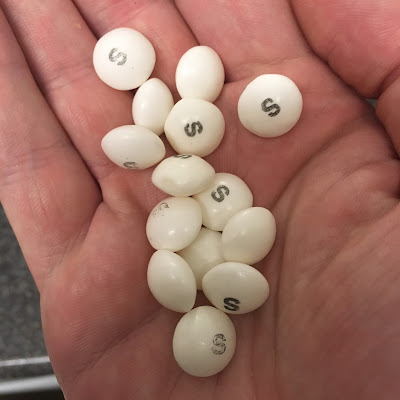 Yes, pure white Skittles, they're definitely unique. Otherwise these are just the regular Skittles, with the same flavours. There is a problem with this, however, in that you can't tell which is which. That may not be an issue to some, but I'm a man who likes to sort his sweets by colour and eat them in order. Green, yellow, orange, red. purple, that's how it should be in my eyes. But now there's no way of knowing! Well, I suppose it's not too bad, there's not really a bad flavour of Skittle, so it was a different way of eating for me, and it was still good. Plus, if you're that worried about ordering your flavours, the colourised version is still available. This is just a great idea for a limited edition, with a very decent message behind it. So grab your white Skittles while you can.