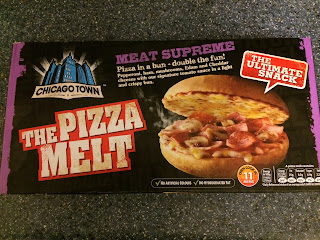 After being thoroughly disappointed with my frozen calzone a couple of days ago, I still had one frozen pizza treat left to try. This is certainly an interesting one, it's a pizza in a bun. I mean, it's not particularly outrageous, but it's still a novel idea. Opening up the packet you're pretty much greeted with two small pizzas, one with just cheese, and the other loaded with pepperoni, ham and mushrooms. The base is different, obviously, but the method is the same, you just cook them up in the oven. But then comes the crazy part, you put them together, and voila! 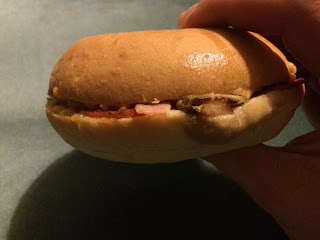 That looks more like a loaded bagel than a pizza, but really it's not a hell of a lot different from the photo on the box. The two halves fit together nicely, and there's a generous amount of toppings and cheese inside, all as good as a frozen pizza would allow. The bun is the real decider here, and I must say I was pleasantly surprised. It's pretty much a cross between a roll and a pizza base, a nice, slightly thick dough that has a satisfying crunch on the outside. It really works well with the topping inside, and while I wouldn't feel happy sandwiching two mini frozen pizzas together in this fashion, the roll like aspects of the bun makes it very natural and pretty tasty. The bun does well to hold all the toppings, and there's a satisfying amount of cheese that brings it all together. These pizza melts are a pretty neat way to enjoy pizza in a rush and on the go. I'm sure I'll be picking up some more in the future.