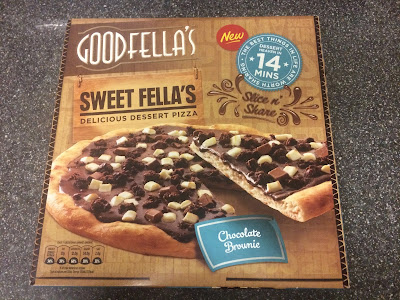 I've been on the lookout for this pizza for a while, and I finally grabbed it for a cool £1.50 in Tesco. It's a dessert pizza from Goodfella's, because when you've had pizza for dinner, why not have another for dessert? This consists of a sweet dough base, topped with chocolate sauce, and white & milk chocolate and brownie pieces. 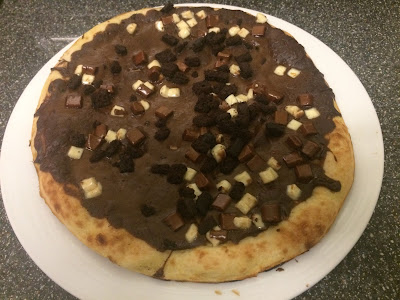 Well, it kind of looks like the picture. I could have spread the topping around more I guess, but hey, it doesn't matter if it's going in my face, right? There's a generous smattering of toppings, and they're all pretty good, chocolatey and filling. The sauce is better than I thought it would be, it's smooth and creamy, and while it is somewhat sickly, it's not as bad as I thought it would be. As for the crust, it's strange. kind of like a crispy pastry mixed with a pancake. It's somewhat stodgy, and not as sweet and fluffy as I'd hoped, so it really does bring down the quality of the pizza overall. This dessert pizza is a neat idea, and it's pulled off well to some extent, but the base sure needs some work.