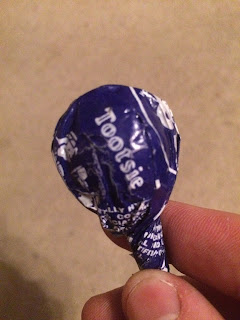 Tootsie Rolls are great, chewy, chocolatey delights that I've picked up on several occasions. But I'd never gotten hold of a Tootsie Pop, despite hearing the well known catchphrase associated with them many times. So how many licks does it take to get to the centre of a Tootsie Pop? A little research shows that a few experiments have been carried out, both with human participants and "licking machines", and results have been varied at best, ranging from 144-411 licks. But I'll give you the real answer.

The answer is a question, and that question is who the hell licks their way through a lollipop? Lollipops are for sucking, surely? I can't imagine standing around continuously scraping my tongue over the same area in an attempt to reach the centre. Turns out it's a rhetorical question anyway, based on the freakishly drawn TV ad from 1969. As you can tell from the gelatinous blob of a boy's constant nagging question, we're all so desperate to get to the centre of a Tootsie Pop because there's actually a little Tootsie Roll inside.

Now, this is not something I was immediately aware of, only hearing the truncated version of the catchphrase, and I'll have you know it's a bit of an odd contrast. There were several Tootsie Pops in Cyber Candy for me to choose from, and I opted for a grape flavour as there's something so distinctly American about grape flavoured candy. The lollipop itself is pretty nice, a bold, flavoursome, juicy pop, certainly not in the realm of Chupa Chups, but pretty close. But then I got to the Tootsie Roll, and the mix of chewy chocolate stuff and crunchy grape flavour is quite strange. On their own they're both great, but I'm not sure they belong together. I didn't exactly have a bad time eating this, but if I wanted a lollipop I'd stick with the classic, uniformly fruity ones rather than pick one of these up again.