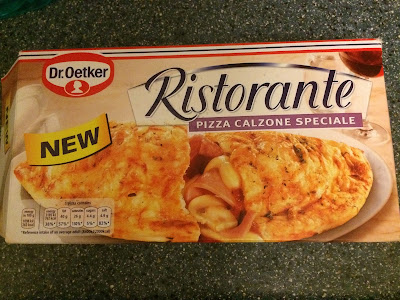 I may love pizza, but I love calzone more. Its all the wonders of a pizza, but folded over and loaded with even more toppings (can they still be called toppings when they're inside?) I'm sure to pick one up whenever I spy one on the menu during a meal out, but I didn't know I wanted a frozen version to cook at home until I spied this in Asda the other day. Ristorante is a good brand too, I love their Pollo pizza, so I was pretty excited to cook this one up.

Turns out I was wrong. I don't want to be wrong, but this just wasn't good eating. To start with, the box told ,e to pop it directly on the shelf, as you'd expect from a regular frozen pizza, but just over halfway through the cooking time it had started to melt through the wire shelf, and I had to haphazardly scoop it up and pop it on a baking tray. I lost some of the filling in the process, but at least it was mostly kept intact. Unfortunately that was just the start of the disappointment. The crust just isn't right. The Ristorante pizzas have a nice, crispy crust, but the stuff this is made of is more like a cheese topped roll. It's stodgy, thick and the cheese on top isn't all that great. Thankfully the filling is more palatable. There's a fair amount of ham, mushrooms and salami, and they all taste pretty nice. There certainly could be more, but what there was was filling enough. The cheese inside is much better, and rounds out the filling quite nicely, but overall I just couldn't get on board with this. Perhaps I'll just stick to eating calzone when I'm eating out.