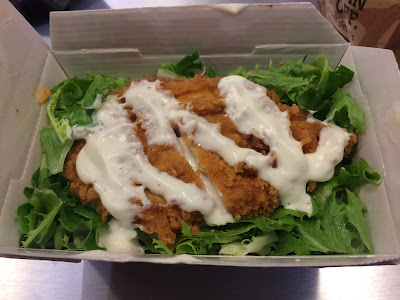 I was recently sent a voucher to try out one of the new (well, fairly new) KFC Rice Boxes. I've thought about having one in the past, but in essence they seemed like a more disappointing version of the Burrito. But then, I do have an unnatural love for burritos, so maybe it was time to try it out. I went for the Zinger version, but they also come in Original and Pulled Chicken varieties. The Pulled Chicken clocks in at just 370 calories, while the other two are both under 600, so this does seem like a good choice for a light meal.

I must say, I was pleasantly surprised. I guess the only big difference between this and the burrito is the lack of a wrap, and its absence isn't all that bad. There's a sizeable chicken fillet with a nice hint of spice, and a generous covering of mayo. Underneath is a layer of standard lettuce, and a nice thick bed of rice underneath. It's certainly not the best quality, somewhat along the lines of microwave rice, but nice microwave rice. There are some kidney beans thrown in, and it has a little hint of spice to it, and when mixed in with the rest it makes for a nice filling salad box. It certainly filled me up based on how few calories it contains, and it comes out at the same level as the burrito in my eyes, it just depend on whether you want the wrap or not. This is a nice healthy option from KFC that's worth picking up for a light lunch.