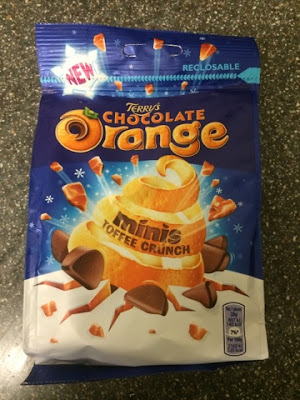 I do love it when a new Chocolate Orange product comes out. Even if it may not be the most original, it means more Chocolate Orange, and that's only a good thing. This year Terry's have brought out a new pack of Minis, supposedly in an effort to catch up with the range of full size Chocolate Orange flavours. I reviewed the original Minis two years ago, the Exploding Candy last year, and now we have Toffee Crunch. The Toffee Crunch Chocolate Orange is an interesting one, not my favourite flavour, but certainly a tasty entry. I was interested to see how it would translate to miniature form. 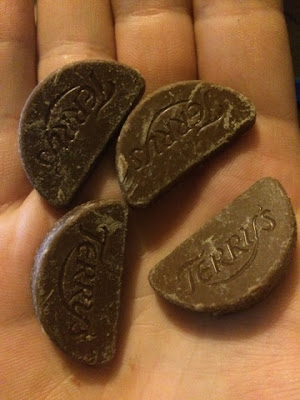 They certainly are mini, but they pack in a lot of flavour. The toffee is noticeable straight away, a very sweet taste that lasts long after the chocolate is gone. There's also the classic orange flavour in there, but there is a bit of conflict between the two, and the toffee seems to win out a lot of the time. Still, whichever flavour is at the forefront at the time, it's still tasty, and these are some good little chocolates. I was worried that the crunchy bits from the full size orange may not translate all that well either, but there's certainly enough in each piece to give a satisfying crunch. These certainly aren't my favourite flavour of Chocolate Orange Minis, but they're a great version of the Toffee Crunch orange, and definitely a good addition to the range.