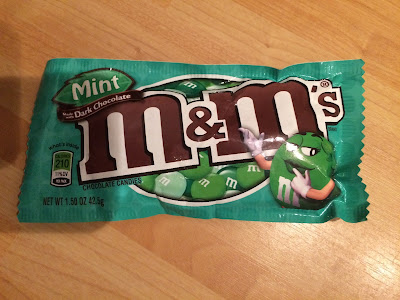 I like to try every flavour of M&Ms I can get my hands on, but I've avoided these mint ones for some time. I'm not entirely sure why, I know I'm not a big fan of mint chocolate, but I was sure these would be mostly harmless. Perhaps it was the price, although I still skipped over them when I saw them for £1 in Wilkinson. Thankfully I also spied some bags in B&M for a mere 69p, so I decided to take the plunge.

I shouldn't have worried too much, these were never going to be awful, just minty, and my word are they minty. It's pretty nice tasting as mint flavour goes, but it's strong, and it certainly lessened the experience for me, although I was left feeling quite fresh. It's a good thing that they decided to go with dark chocolate for these ones, it lends a nice butter undertone that takes the edge off the mint, if they went with milk chocolate I believe it would have just been overpowered. These certainly aren't bad, they're just too strong for my liking. I think I'll stick to the other flavours from now on.