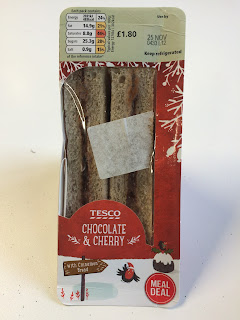 'Tis the season, and on top of their usual Christmas sandwich fare, Tesco have added an... interesting one into the mix. This is a chocolate and cherry sandwich, and it has been met with revulsion from many people. But to those people, I say "calm down dear, it's only a sandwich". I mean, honestly, I hate to rely on the old adage of "if you don't like it don't buy it", but it's not like they've taken the turkey sandwich off the shelves and forced us to eat this one instead. But what do I know, I'm one to embrace all the weird stuff that Tesco churns out at an impressive rate, and I certainly wanted to get my hands on this one. This sandwich consists of chocolate spread, glace cherries and mascarpone cheese between two slices of cinnamon bread.

Okay, I'll concede that this is certainly a lot sweeter than you'd expect your average sandwich to be. But chocolate spread is a thing, they've just chucked a few more ingredients into the mix. I must say, it certainly isn't a bad sandwich, it's tasty even. The chocolate spread is a nice smooth filling, and mixed with the mascarpone cheese it makes for a nice, creamy spread that is certainly enhanced by the cherries. If it were just chocolate spread it may have been a bit thick, but the cheese does help even out the texture. As for the bread, it's alright. I understand they were trying to stick to the sweet theme, and this probably wouldn't have tasted quite right between two slices of wholemeal, but the bread we're given is a little stodgy, and doesn't taste that much like cinnamon. There's a little bit of spice, sure, but it's beaten out by the sweet stuff in the middle.

This chocolate and cherry sandwich is not a sign of the end times, and no, it's certainly not something I'd consider a traditional sandwich. But it's a different, tasty offering that is pleasantly sweet, although not perfect. For those up in arms, there's certainly the option of not buying it. But for those who want something a little crazy, this is worth a shot.