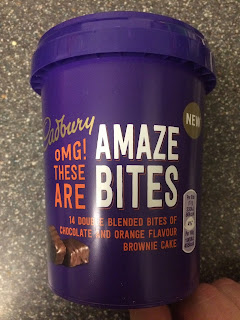 I reviewed the regular chocolate variety of these Amaze Bites last month, and found them to be pretty tasty, of not a little dense. This weekend I fancied picking up another pot, and this time I went for the orange flavour. After all, who doesn't like a bit of chocolate orange?

The cakes themselves are the same good stuff, a dense chocolate brownie cake that is most definitely filling, a few of these would probably satisfy the most ravenous cake lover. These are still a little too stodgy I guess, but they're tasty enough for it not to count against them too much. As for the orange flavour, that's exactly what it is, an orange flavour, and I could tell. It starts off as a nice orange taste, but quickly transforms into an overly sweet, artificial tone that brings down the quality of the rest of the cake. Thankfully the abundance of chocolate, especially the coating on the outside, stops the orange taste from ruining the whole thing, but overall it works out to a pretty average cake bite. If you're gonna pick up some Amaze Bites, you're better off with the regular chocolate ones.