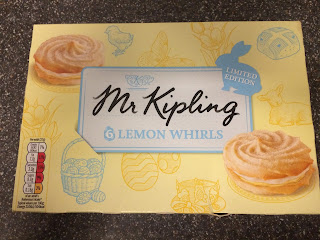 I've steered fairly clear of the Easter themed cakes this year, for no reason in particular, I guess I've just tried them all already, and I have an unhealthy compulsion to not eat anything unless it's new. I'm pretty sure I haven't tried these Mr. Kipling lemon whirls before, and I don't remember seeing them in previous years, but correct me if I'm wrong. I think it's pretty clear what these are, they're like Viennese Whirls, but with lemon flavoured filling instead of the raspberry jam.

I'm just gonna say it, I'm disappointed. These just aren't that lemony. It may be just down to the actual volume of the stuff, seeing as there's a dramatic drop from 11% raspberry jam to just 9% lemon across varieties, but I don't think a 2% discrepancy in filling would make them so bland. I guess the filling just isn't that noticeable. There's a hint of lemon throughout, but most of the time it's swamped by the biscuit and the cream, and there just doesn't seem to be enough stuff in the middle to stop the shortcake from tasting pretty dry. Still, it's the same old shortcake, and the cream is nice enough, it just all seems out of whack. Maybe if they went with some proper lemon stuff, like lemon curd, it would be a bit better. But from a company that have churned out some great seasonal whirls, these just left me longing for something better.