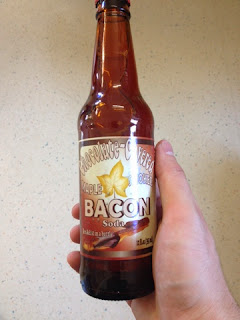 A couple of years ago I reviewed a chocolate soda, and found it to be completely awful. Fizzy, chocolate water? No thanks. But apparently I never learn my lesson, as today I picked up this monstrous creation, which promises chocolate, maple and bacon all in one fizzy drink. Does that sound good? No? Well, you'd be right.

Now, for some reason, this stuff doesn't taste as awful as the regular chocolate soda. I'm not sure why, because the other flavours aren't noticeable at all. This basically tastes like carbonated, watered down chocolate sauce. No hint of bacon. But I guess the maple takes the edge off the awful chocolate, as I'm actually able to nurse this a lot more than its predecessor. But it's still awful. Absolutely awful. Don't drink this stuff, you might think you'll like it, but you won't.