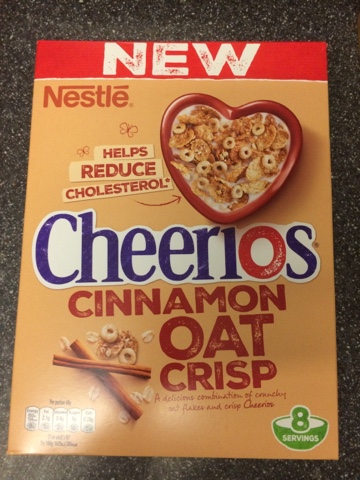 I like Cheerios, I like oats, and I like cinnamon, so having all three of them in the same bowl sounded damn good to me. It's a combination of Cheerios and cinnamon flavoured oat flakes. Maybe I would see why kids like the taste of Cinnamon Oat Crisp. Oh, wait, wrong thing.
There's nothing wrong with these by any means, but I can't help but think they miss the mark. The Cheerios are alright, but they don't have that nice mix of grains you'd get in a regular packet. As for the oat crisps, they're nice and crunchy, and they have a hint of spice, but they end up falling a bit flat, especially with the relative blandness of the Cheerios. This cereal is a good enough mix of oats and cinnamon, but it's not enough to wow me. I'd rather go for other cinnamon cereals with a bit more of a kick.
My rating: 3/5
Posted by A Review A Day at 12:49