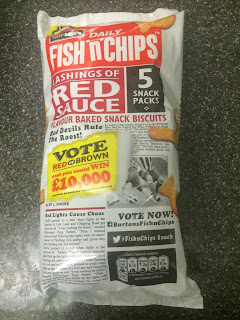 I've seen these packs of Fish 'N' Chips popping up all over the place in recent months, from Tesco to 99p stores. I've tried the curry sauce variety and found them to be pretty okay,the salt and vinegar seemed like it wouldn't amaze me. But it seems there was a gap in the market they were keen on filling, so now we have Fish 'N' Chips in both red and brown sauce flavours. Ketchup isn't an oft used flavouring, and I can't say I've experience brown sauce crisps before, so I was looking forward to trying them out.

It's clear to see why they went with "red sauce" to describe these ones. They definitely don't taste like the Heinz brand stuff, it's very much a replica of the traditional chip shop ketchup, quite sweet and very vinegary. They've actually done a pretty good job with the flavouring, but the problem is it doesn't last too long, it soon fades out leaving behind a pretty tasteless crisp. Still, it's good while it lasts, perhaps a bit too heavy on the vinegar side, but hey, chip shop ketchup is like that anyway, so it's a fairly good emulation. 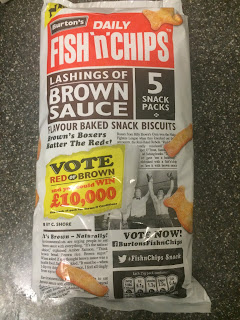 The brown sauce is better in terms of longer lasting flavour. It's a bold, rich taste that is certainly in the realm of a good bottle of brown sauce. Again, though, it suffers from being a little too vinegary, and in a flavour that's already quite bitter it does get quite overwhelming at times. So while the flavouring is strong and longer lasting, I wasn't sure it was really the kind of flavour I wanted hanging around. Nice enough, and thankfully these come in quite small packs, as any more and I feel it would have been a bit too acidic tasting for my liking.

These two new flavour aren't bad/ They're far from perfect, but they're a nice addition to an interesting little range of crisps. They're probably the closest you'll get to those dubious chip shop sauces, it just depends whether that's what you want in a crisp.