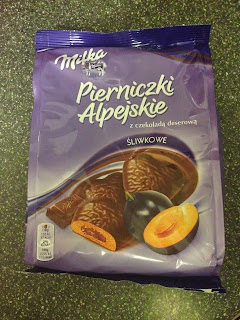 I've long neglected the several Polish supermarkets in my town, but thought it was worth popping in to see what interesting snacks I could find. This Pierniczki Alpejskie was certainly one of them. It boasts the Milka name, which is always a good thing, but apart from that I had no idea what it was. Chocolate on the outside, yes, but inside? Well, some form of biscuit or sponge, and some plum, from the look of the picture. Well, I'm not one to pass up on food just because I don't know what the hell is in it, so in my face it went. 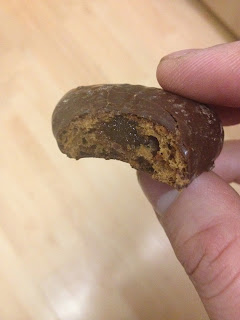 Well, I was right about the chocolate, also the plum. The biscuit part, unfortunately, is gingerbread. Not your average crunchy gingerbread though, it's more of a soft, cakey gingerbread. I say unfortunately, but that's only because I'm not really a fan of gingerbread. In this case in particular it's tremendously overwhelming, knocking out the taste of the Milka chocolate, which was the only bit I was looking forward to. The plum centre does help to balance things out, adding a bit of sweetness to the spicy sponge, but I would have preferred a sweeter fruit.

It's safe to say that I didn't like these... biscuits? Cakes? I'm not sure really. I did try a few just to make sure I wasn't disregarding them because they're a bit different, and they certainly became more edible once I got used to the flavour, as they got a little bit sweeter on my tastebuds. But still, they're not overly nice. Too much gingerbread, not enough sweetness. I don't think I'd try these again. They may be a traditional thing over in Poland, but I can see why they haven't caught on here.