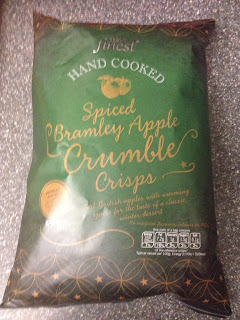 Yeah, that's right, I'm not bowing out of the crisp and popcorn game yet, there's still plenty more to try this season. So after trying my two bags of oddly flavoured savoury popcorn, I've gone the other direction and tucked into this bag of sweet, dessert flavoured crisps.

Yes, apple crumble flavoured crisps, boasting all the appley, spicy goodness of the classic dessert, but contained in potato chips. No custard included though, how sad. I was a little apprehensive about buying these after the dessert themed Pringles I bought a while back, but curiosity got the better of me, and thankfully I was rewarded.

I don't know how these work, but they do. These crisps taste just like an apple crumble, albeit a well done and crunchy one. They have a distinct fruity flavour, and the spices are pretty spot on as well. The only problem I had was that the spices were a little too strong, overwhelming the apple flavour a bit, so I couldn't bring myself to eat too many at a time. But despite apple crumble being a very odd flavour for crisps, Tesco have pulled it off surprisingly well. Grab 'em while you can.