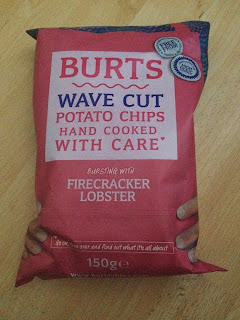 I've been going through a crisp phase recently, and while most brands have the same old flavours, some have some interesting ones that I have yet to try. This was especially the case with this pack of Burts Potato Chips, because not only have I never eaten lobster flavoured crisps, I've also never eaten lobster. So who am I to judge the authenticity of lobster crisps? Well, I may not be the most educated in seafood matters, but I do know when things taste nice, and these do.

I was expecting something along the lines of prawn cocktail flavour, not so much in taste, but in intensity. Instead, I was met with a distinctively meaty flavour, with a slight fishy tinge, but nothing overwhelming for the senses. I certainly didn't feel like I was left with bad breath after these. The firecracker element of this flavour is interesting too. There's a lovely peppery flavour, that isn't exactly spicy, but rounds off the whole experience to give a lovely saucy texture. These crisps were delicious, as evidenced by me eating the whole bag in one sitting. I'm certainly looking forward to eating real lobster now.