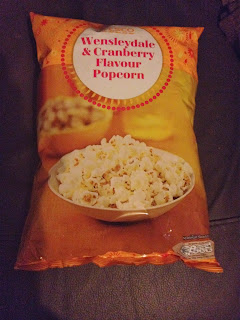 It was only yesterday that I stated my general dislike of strange, savoury popcorn flavours. But it turns out I have merely not been impressed by bacon popcorn, as I have tried other flavours that I found quite tasty. So when I spied this wensleydale and cranberry popcorn in Tesco today, I had to give it a go. I think I've tried cheese popcorn once in the past, and I don't remember particularly liking it, but I was willing to try this for the sake of review.

I was a little dubious at first, the cheesiness put me off, but the promise of the sweetness of cranberry drew me in. Thankfully, my decision to dabble was rewarded with delight. This certainly is a cheesy popcorn, but the wensleydale is not overly pronounced. It's a smooth, mellow flavour, and while the cranberry isn't massively flavoursome, there's a decidedly sweet tinge to every mouthful that takes the edge off the cheesiness and rounds off the flavour nicely, combining nicely with the popcorn texture. All that being said though, it's still a little weird. I'm just not ready to give up on the traditional sweet and toffee flavours to delve into cheese and chilli flavoured popcorns, and despite this bag being quite nice, it's certainly an acquired taste that I think would take me a while to get used to. If I were to be offered any flavour of popcorn, I'd go with the sweet, but this is a great flavour for anyone looking for something a little different.