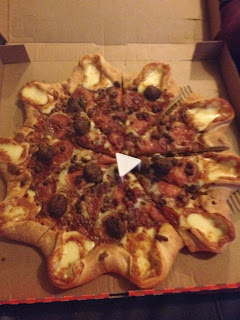 These pizzas are starting to look less and less like pizzas, I swear. Yes, we've seen many crazy things shoved into pizza crust in the name of deliciousness. Hot dogs, cheeseburgers, meatballs and garlic, and now? Well, cheese. But not just one type of cheese, oh no, five types of cheese. It looks like this has already been devoured en masse over the Atlantic, and they've already reverted back to a simpler three cheese pizza. But why? Are five cheeses just too much? 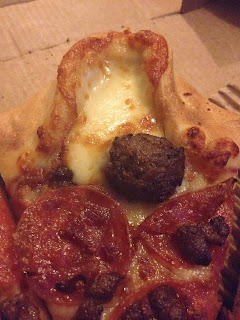 Well, I don't think so. I thoroughly enjoyed this crust. As you can see, each slice of pizza has a pocket, like the ones seen in the cheeseburger and crown crust pizzas, but this time each one is filled with a glorious, melted combination of cheeses that elegantly cover the palate with grease and happiness. Tasty, certainly, but I can't say I'm convinced with the arrangement. You see, where there is no pool of cheese, there is simply plain, doughy crust, which only serves to break up the cheese experience. I understand that five cheese cannot be rolled up in one crust, that would just be insane. But, instead of tiny cheese jacuzzis adorning the edge of the pizza, could not a moat system be implemented? I don't know, I'm not a pizza technician, but this lack of overall cheesy coverage has left me feeling slightly unfulfilled. Still, it's a nice attempt at something different in the already crazily populated crust market. What will happen next? Six cheeses? No, that would be madness.