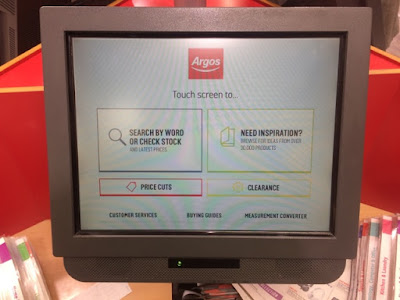 Everyone like a bit of Argos, don't they? They stock all manner of things, and there's no need to browse countless aisles, just look up the number, type it in and someone upstairs does all the leg work for you. It's a winning formula, and it's even better when you can reserve something online and just wander right in and pick it up. But every once in a while I find myself going into Argos without a specific plan of action. Perhaps I want to look something up on the fly, and that is when I am confronted with the horror of the Argos touch screens.

There are two types of commonly used touch screen technologies. There is capacitive, which utilises the electrical current running through your body, and there's resistive, which relies on pressure applied to the screen itself. The Argos touch screen appears to be neither. While I suppose it falls into the latter category, I often find myself pressing down harder than I probably should onto the screen with little visible effect. About one press in five I find a letter appears on the screen, which is a nice sign things are going my way. But when it comes to the space bar you can never tell if you've been successful. The only way to find out is to press hard on another letter, and more often than not I find it appears as an extension of the previous word, forcing me to jam my finger down on the delete button and try all over again. It wouldn't be so bad if there was any visual clue that the button was pushed, but no, it's a static row of letters, watching me silently.

The only reason I can think of as to why these screens are so useless is that it's a thinly veiled attempt to fight back against the rising tide of technological advance. If I can't work the touch screen, I'm more likely to talk to an employee, or flick through the massive, plentiful catalogues that they still insist on churning out at an alarming rate. But even if I use the catalogue and want to check stock, I still have to use the touch screen, and it's infuriating. I suppose I should give it at least some credit, I can actually get the job done. It's just I don't highly rank a screen that gives me sore finger tips after a minute of use. Sort it out, Argos.